Asked recently at an author event where my inspiration for my crime novels comes from, I said simply, ‘life’. THE DARE, published on April 28th, is the third book in the Natalie Ward series and is to date my favourite but also the one that scared me the most.

Readers will know that I research each book extensively and THE DARE was no exception. Delving into the world of internet safety, I stumbled across instances where social media resulted in death – namely during games of dare.

Now, as a youngster I played Dare – a game in which your friends would encourage you too do crazy things like kiss the boy you fancied in your class, or spin around and around until you fainted – however,  some of the challenges young people have been taking up on social media go way beyond those seemingly innocent dares of yesteryear.

As we know, many teenagers are blinkered when it comes to safety first and due to a mixture of hormones and rebellious streaks combined with egging on by friends some take the online crazes to another level. I’m not talking the Bucket Challenge here – I’m talking duct tape, Tide Pod,  Fire Challenge, Kylie Jenner, and Cinnamon Challenge. Look them up to see what I mean but the one that stunned me was a craze that was huge in France where children would deliberately go missing for 48 hours.

Such madness could result in all manner of disasters and of course the idea became the catalyst for my book.

Although the book was written and submitted last year, I noticed that in February this year, the police in the UK issued warnings after the craze resurfaced and this challenge hit newspaper headlines again.

When I write my novels, I start with something dreadful or horrific that could easily happen to one of us or our children. It makes my writing more credible and I hope highlights some of the issues facing our society.

Where do I get my inspiration? I don’t have to look far for it. It’s under our noses!

PURCHASE YOUR COPY FROM AMAZON 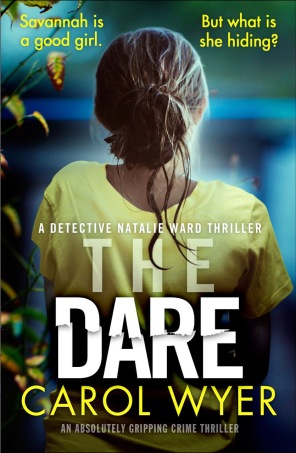 Jane’s daughter is a good girl. But what is she hiding?

When thirteen-year-old Savannah Hopkins doesn’t come straight home from school as she always does, her mother Jane immediately raises the alarm. With her blonde ponytail and red school jumper, someone must have spotted Savannah.

Detective Natalie Ward is determined to help the distraught mother – her own daughter is the same age as Savannah. But before Natalie and her team can get started, their worst fears are confirmed when the teenager’s broken body is found in nearby shrubland.

Evidence points towards a local recluse, but just as Natalie closes the net around him, one of Savannah’s friends, Harriet, is reported missing. Harriet might look grown up and sophisticated but she is only fourteen…

As Natalie delves into the lives of both girls, she soon discovers a sinister video on both their phones, daring the girls to disappear from their families for 48 hours. She’s sure this is the key to the case, but before she can act, Harriet’s body is found discarded on a roadside.

Natalie’s superiors don’t have to put any extra pressure on Natalie. Devastated, she and her team work without sleep, watching that video over and over. But just as she thinks they’re getting close, the person Natalie loves more than anything goes missing.

Natalie is no stranger to loss. She is terrified and the clock is ticking. Can she push through her fear to catch this depraved killer, before her loved one becomes the next victim?

This gripping rollercoaster of a read will have you up in the small hours turning the pages. Fans of Angela Marsons, Rachel Caine and Robert Dugoni will love The Dare.