Ten years ago this week, I decided to write a novel that would entertain, make readers laugh and would resonate with them.

I hadn’t thought about becoming ‘a writer’. I believed I was a one-trick pony. I wrote the book but by the end of it, I had caught the writing bug, along with an idea for a sequel, and a series of non-fiction comedies based on similar themes.

I sent endless emails to agents and publishers but my book and ideas were rejected, time after time after time. In the end, I turned to self-publication, put the book up on Amazon and, using FeedARead, got my book into print.

I read somewhere that a writer can count themselves lucky if they sell 400 copies of their debut novel in a year. In the ensuing 12 months, I sold only half that number, but by the start of 2011, thanks to the generosity of the blogging community and book reviewers who agreed to read a book from an unknown writer, sales suddenly gathered momentum and 5-star reviews even appeared in newspapers and magazines. By January 2012, I found myself featured in Woman’s Own magazine, in an article about best-selling writers.

A life of a writer has ups and downs, successes and failures. It is a bumpy road. Every success is hard-fought and writing the book is only the beginning. The rest is endless promotion, connecting with readers, doing talks, writing press releases, keeping up relations with bloggers, and constantly trying to get your name out there. It is tough! Oh boy, is it tough! It can result in anxiety and sleepless nights, and some days, you are so busy trying to juggle everything, there is barely enough time to write another book let alone live life.

What you require is tenacity and patience. Luckily, I have both and eventually they paid off. My biggest ‘lucky break’ and pivotal turning point came when editor Lydia Vassar-Smith at Bookouture saw my potential and I was offered a contract. It was with her guidance that I moved from comedy to the dark side – probably the best move I could ever have made. Today, my crime series have sold well over 600,000 copies and have been translated into several languages.

Let me say, the journey hasn’t been easy, but it has certainly had its highlights including:

I won’t list the lows. I try to learn from them rather than dwell on them. Suffice to say, there were plenty but ultimately, they don’t matter because, in spite of the sleepless nights, I have enjoyed myself hugely. I have loved creating and living with my characters and even more than that, sharing them and their lives with you. 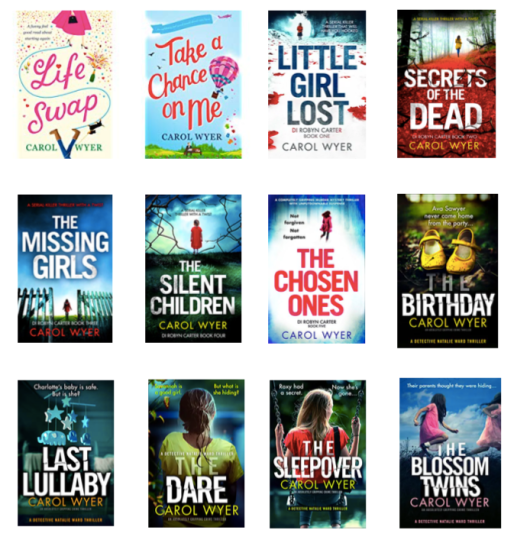 And finally, and most importantly, I have loved meeting you all. Before I began writing I was a reclusive, lonely woman, shut inside a house with little sense of purpose. The day I began writing and blogging was the day my world opened up. I have met so many people virtually who I count as friends. I have a wonderful Street Team who support me and chat to me regularly, and who I can’t thank enough. There are also three people I wish to mention who began this journey with me and who I met while I was blogging as research for that first novel. They are my ‘Golden Girls’  – Diane Croad, Barbara Brannon White and Pam Lofton who all began blogging at the same time as  I did and welcomed me into their lives. I shall be forever grateful for their endless enthusiasm and support.

So what about the next ten years? Well, more crime novels, two new series and another couple of comedies are all planned in my head so… here’s to the next ten!